Proper pruning is essential in developing a tree with a strong structure and desirable form. Trees that receive the appropriate pruning measures while they are young will require little corrective pruning when they mature.

Keep these few simple principles in mind before pruning a tree: 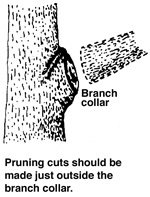 Where you make a pruning cut is critical to a tree’s response in growth and wound closure. Make pruning cuts just outside the branch collar. Because the branch collar contains trunk or parent branch tissues, the tree will be damaged unnecessarily if you remove or damage it. In fact, if the cut is large, the tree may suffer permanent internal decay from an improper pruning cut.

If a permanent branch is to be shortened, cut it back to a lateral branch or bud. Internodal cuts, or cuts made between buds or branches, may lead to stem decay, sprout production, and misdirected growth. 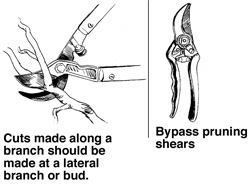 When pruning trees, it is important to have the right tool for the job. For small trees, most of the cuts can be made with hand pruning shears (secateurs). The scissor-type, or bypass blade hand pruners, are preferred over the anvil type. They make cleaner, more accurate cuts. Cuts larger than one-half inch in diameter should be made with lopping shears or a pruning saw.

Never use hedge shears to prune a tree. Whatever tool you use, make sure it is kept clean and sharp. 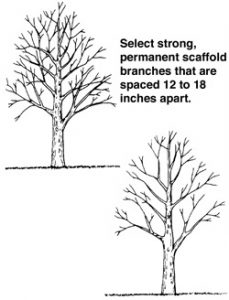 A good structure of primary scaffold branches should be established while the tree is young. The scaffold branches provide the framework of the mature tree. Properly trained young trees will develop a strong structure that requires less corrective pruning as they mature.

The goal in training young trees is to establish a strong trunk with sturdy, well-spaced branches. The strength of the branch structure depends on the relative sizes of the branches, the branch angles, and the spacing of the limbs. Naturally, those factors vary with the growth habit of the tree. Pin oaks and sweetgums, for example, have a conical shape with a central leader. Elms and live oaks are often wide-spreading without a central leader. Other trees, such as lindens and Bradford pears, are densely branched. Good pruning techniques remove structurally weak branches while maintaining the natural form of the tree. 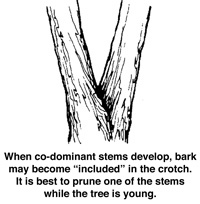 For most young trees, maintain a single dominant leader growing upward. Do not prune back the tip of this leader. Do not allow secondary branches to outgrow the leader. Sometimes a tree will develop double leaders known as co-dominant stems. Co-dominant stems can lead to structural weaknesses, so it is best to remove one of the stems while the tree is young.

The lateral branches growing on the sides contribute to the development of a sturdy well-tapered trunk. It is important to leave some of these lateral branches in place, even though they may be pruned out later. These branches, known as temporary branches, also help protect the trunk from sun and mechanical injury. Temporary branches should be kept short enough not to be an obstruction or compete with selected permanent branches. 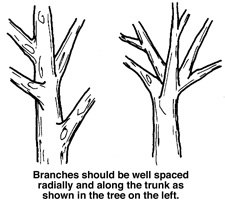 Nursery trees often have low branches that may make the tree appear well-proportioned when young, but low branches are seldom appropriate for large-growing trees in an urban environment. How a young tree is trained depends on its primary function in the landscape. For example, street trees must be pruned so that they allow at least 16 feet of clearance for traffic. Most landscape trees require only about 8 feet of clearance.

The height of the lowest permanent branch is determined by the tree’s intended function and location in the landscape. Trees that are used to screen an unsightly view or provide a wind break may be allowed to branch low to the ground. Most large-growing trees in the landscape must eventually be pruned to allow head clearance.

The spacing of branches, both vertically and radially, in the tree is very important. Branches selected as permanent scaffold branches must be well-spaced along the trunk. Maintain radial balance with branches growing outward in each direction.

A good rule of thumb for the vertical spacing of permanent branches is to maintain a distance equal to 3 percent of the tree’s eventual height. Thus, a tree that will be 50 feet tall should have permanent scaffold branches spaced about 18 inches apart along the trunk. Avoid allowing two scaffold branches to arise one above the other on the same side of the tree.

Some trees have a tendency to develop branches with narrow angles of attachment and tight crotches. As the tree grows, bark can become enclosed deep within the crotch between the branch and the trunk. Such growth is called included bark. Included bark weakens the attachment of the branch to the trunk and can lead to branch failure when the tree matures. You should prune branches with weak attachments while they are young.

Avoid overthinning the interior of the tree. The leaves of each branch must manufacture enough food to keep that branch alive and growing. In addition, each branch must contribute food to grow and feed the trunk and roots. Removal of too many leaves can “starve” the tree, reduce growth, and make the tree unhealthy. A good rule of thumb is to maintain at least half the foliage on branches arising in the lower two-thirds of the tree.

Pruning of newly planted trees should be limited to corrective pruning. Remove torn or broken branches, and save other pruning measures for the second or third year.

The belief that trees should be pruned when planted to compensate for root loss is misguided. Trees need their leaves and shoot tips to provide food and the substances that stimulate new root production. Unpruned trees establish faster with a stronger root system than trees pruned at the time of planting.

Wound dressings were once thought to accelerate wound closure, protect against insects and diseases, and reduce decay.

However, research has shown that dressings do not reduce decay or speed closure and rarely prevent insect or disease infestations. Most experts recommend that wound dressing not be used. If a dressing must be used for cosmetic purposes, use a thin coating of a material that is not toxic to the plant.

This brochure is one in a series published by the International Society of Arboriculture as part of its Consumer Information Program. You may have additional interest in the following titles currently in the series:

Developed by the International Society of Arboriculture (ISA), a non-profit organization supporting tree care research around the world and is dedicated to the care and preservation of shade and ornamental trees. For further information, contact:

They don’t just want to come cut down every tree; they really know what they’re doing, are pleasant to be around and are very neat and tidy.”